Halos and Horns – Why Being Attractive Opens Doors 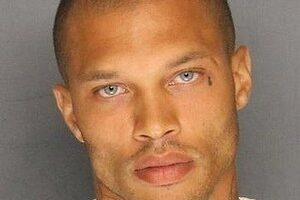 How often do you see the details of an American criminal circulated everywhere in the Australian media?

Not too often, but in the case of ‘hot felon’ Jeremy Meeks, his face is plastered over social media as well as traditional media. Why? Because of that incredible bone structure and brooding eyes.

Researchers have found an effect which they have labelled Halos and Horns, which boils down to humans giving a person who has one attractive trait, many others, and an unattractive person is assumed to have many other negative personality traits.  So convicted felon Jeremy Meeks’ bone structure is giving him an unfair advantage and is likely in his sentence being small as compared to a less attractive criminal.  Already it has resulted in him being offered a modelling contract for when he leaves the penal system.

That Jeremy Meeks lawyer wants his client to wear a suit rather than prison garb to court so that his chances of a ‘fair trial’ are enhanced, is actually his lawyer trying to reduce his sentence, as he knows from research that when we dress a criminal in a conservative manner and when you have the good looks of Meeks, his chances of a greatly reduced sentence are the greatest when the jury isn’t reminded of his criminal past.  When he turns up in court in a designer suit and tie, his tattoos covered, he will look like a movie star and is most likely to be treated much more leniently.

Given this knowledge, if you want to get ahead in the workplace and have more doors opened to you, ideally think about how you are presenting yourself, and how you can maximise what nature has given you to allow for the best impression to be left with others.

Sure we don’t all have the bone structure or body of a model, but we can all dress to flatter our body, get a haircut that suits us and do some fast and easy grooming to maximise our attractiveness. Research has shown that taking care with your dress and grooming tells the world that you value yourself and therefore you will take care and pay attention to the details of the work you’re given. It says that you’re mentally stable and are in control of your life, definite positive traits for any employer (or date!).

Good looks open doors and attractiveness can give you a pay bonus of as much as 25% extra in your pay packet.  The question to ask yourself is how are you presenting yourself and is it helping or hindering your opportunities?

Are You Holding onto Dated Clothes in your Wardrobe?
February 4, 2015

Have a question?
We'd love to hear from you!
Go to Top